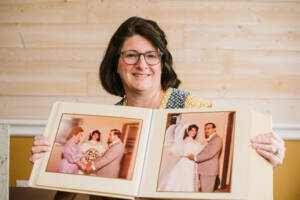 When you know, you know, and Patricia Corrao knew that her father, Ronald Russo, was declining.

Battling several health issues, including COVID-19, Ronald was being treated in a hospital in Long Island, New York, while Patricia was living in Pennsylvania, feeling helpless.

She tried to move Ronald into a hospice in New York, but the doctors said he wasn’t a candidate. A nurse herself, Patricia contacted several facilities, including a hospital closer to her home in Lancaster, but had no luck getting him admitted.

“It was clear to me that his time was short, and I wanted to bring him home to care for him,” she said.

Patricia reached out to a nurse she knew who suggested Masonic Village Hospice. She was surprised to learn that her dad did not need to be a Mason to utilize the services.

“I called and gave them all of my dad’s records and information, and maybe two days later, they agreed to help. I broke down – I was so relieved,” she said.

Patricia’s mother, Mary Russo, and her father had not been apart in the nearly 65 years they were married. Patricia intended to keep it that way.

Her parents came to live with her in January 2021 for Ronald’s end-of-life and hospice care. Ronald was transported to her house via a five-hour ambulance ride. Hospice had all the equipment delivered the very next day.

“When the ambulance arrived at my home, they sent out a nurse immediately to help get us settled,” she said. “I can’t praise them enough. They went above and beyond. I keep telling people about Masonic Village Hospice. I feel like if I didn’t know about it, others might not know they exist. It was such a great experience.”

Ronald stayed with Patricia at her house for about two weeks before he died. Her mother, Mary, went back to New York shortly thereafter. “My father died surrounded by people who loved him,” Patricia said. “My parents were together. It was a good ending.”

Patricia’s parents met in Queens, New York City. Ronald was from the College Point neighborhood, and Mary was from Astoria. They met at an amusement park when Mary was 16 and Ronald was 19. “They had a wonderful love story and were like two peas in a pod,” Patricia said.

Ronald had Parkinson’s disease and as it progressed, Mary was having trouble taking care of him. That’s when Patricia had him admitted to the hospital in Long Island. Doctors discussed sending him home or to a rehabilitation facility, but then he’d suffer another health issue and have to stay.

“I knew my dad was not fine,” she said. “It had been one thing after another since he’d been at the hospital. He’s not the kind of person to complain or say anything. I’d try to advocate for him over the phone. I told them [the doctors] about all the things he was doing before that he could no longer do.”

Patricia made the trip to New York after finally getting privileges to enter the hospital, due to COVID-19 protocols.

“I said to the doctor, ‘I know doctors are about saving lives, but I know my dad. He’s not well.’ When you start seeing the falling and other things, it’s the beginning of the long goodbye,” she said.

Since Ronald’s passing, Mary has traveled back and forth from New York to Pennsylvania. Patricia hopes to convince her mom to move in with her and her husband one day.

“I’d like her to come down here while she can still enjoy life,” she said.

Patricia has been a nurse since 1991. She worked at several nursing homes and spent the past 14 years as a float nurse at the Lebanon VA Medical Center.

Patricia knows how helpful hospice can be for families as she has experience as a hospice volunteer.

“My dad was a proud, private gentleman,” she said. “Having me there to take care of him in such a sensitive, personal way [along with the hospice nurses] was so meaningful. I don’t have any regrets. I did the best I could.”